The next chateau up w 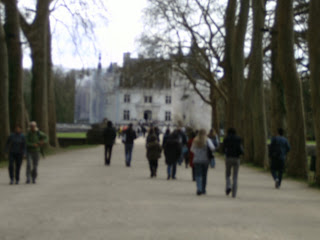 as Chenonceau. By far this is my very favorite castle. Of course, I've only seen a couple. The Loire Valley is full of them, if you hav ethe time to visit each.
Not only is Chenonceau amazing, the gardens are beautiful. I am not sure how old it is, but goes back to at least 1412 when it was handed over to the English. Charles VII regained it and at one point it was burned. Jean II rebuilt and fortified it, wihch was completed in approximately 1432.

It is built on the banks of the river Cher and the ownership changed several times over the decades. In 1522 the Bohiers came into possession. They kept the keep and a well, but demolished the rest. Building on the new castle began in 1515 and ended in 1522. If I am correct, it is what stands their today.
At one point it became the property of the Crown and Henry II, when he became king, gifted Chenonceau to his m 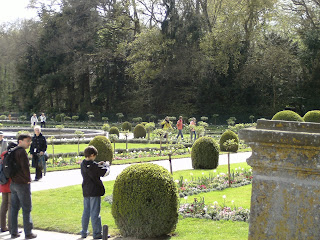 istress, Diane. Diane managed the estate and in 1551 she created the gardens and orchards over two hectares. She also commissioned a drawbridge. However, when the king died, the widow, Catherine de Medicis, wanted the estate returned to the crown since it had the higher income. The queen added further additions to the castle which included a pavilion and added two storeys of gallaries built on the bridge with a skylight attic. The estate is now owend by the Menier family, who maintain it in all of its glory. 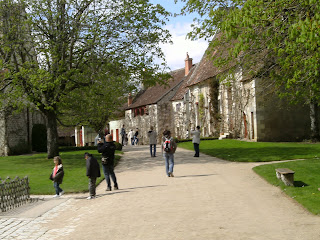 Also included on the grounds is an 16th century farm with homes, a stable, kitchen gardens. A pavilion and buildings stand not far away and shopping can be done for wine and such, and you can also enjoy a nice lunch at umbrelled tables.

Normally I find the older history the most interesting, but in this case, the 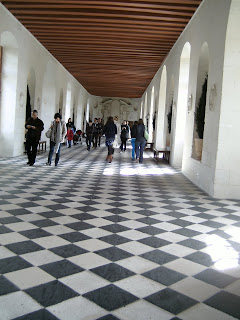 newer history is what caught my attention. In 1913, Henri Menier, the grandson of the founder of the chocolate firm - Menier, purchased the castle. I was really hoping for some delicious chocolate on this trip, but none could be found. Then, on the heels of the purchase, the chateau was converted into a military hospital for the duration of WWI. But what I found to be most interesting is that during the Nazi Occupation of France, the south side of Chenonceau opened onto unoccupied France but the entrance was in occupied France. In the hall pictured, one end is in occupied and the other is not. Both the Nazi and Free French took advantage of this situation and would meet at the center of the hall to either exchange prisioners, information, who knows what else but I have visions of spies, meeting and then disappearing into the night once again.
Posted by Amy DeTrempe