Today, more time will be spent on the bus than not. But that is okay because we are going to visit some awesome places.

First stop, Chartres. This is my favorite cathedral. My sister insists I will change my mind once I set foot in Sainte Chappelle. I haven't been able to get inside yet and crossing fingers for next time. 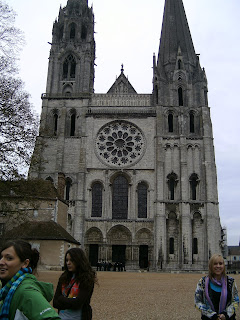 Our Lady of Chartres is known for its stained glass windows which are amazing and beautiful. I am so glad they survived the Revolution and two world wars. However, the church wasn't so lucky in the beginning. The original church was built in the third or fourth and burnt in 743. The second was burnt in 858 by Danish pirates. And the third, burned on 1020. In 1134 a fire burnt the town and damaged the front of the church. Eventually two towers were complete in 1144. The Royal Portabl was built in the middle of the 12th century. But, on July 10, 1194, the church burned again. A new church was begun that year and completed in 1220. Additions were added in 1326, 1417, 1513, 1753. Another fire touched the church in 1836. While the roof and two belfreys were burnt, the rest of the church was unharmed.

Chartres also a famous labryinths. I wish I had a picture of it but none of mine came out.

This labyrinth was meant to be walked but is reported to be infrequently used today. In the past it could be walked as a pilgrimage and/or for repentance. As a pilgrimage it was a questing, searching journey with the hope of becoming closer to God. When used for repentance the pilgrims would walk on their knees. Sometimes this eleven-circuit labyrinth would serve as a substitute for an actual pilgrimage to Jerusalem and as a result came to be called the "Chemin de Jerusalem" or Road of Jerusalem.

In walking the Chartres style labyrinth the walker meanders through each of the four quadrants several times before reaching the goal. An expectancy is created as to when the center will be reached. At the center is a rosette design which has a rich symbolic value including that of enlightenment. The four arms of the cross are readily visible and provide significant Christian symbolism. www.lessons4living.com/chartres_labyrinth.htm

The brass center was melted down during the French Revolution for metal.

In addition to the labrynth, Chartres is also believed to have in it its possession the tunic worn by the Virgin Mary, the Sancta Camisa. It was supposedly given to Chartres by Chareemagne who received it as a gift during a crusad in Jerusalem. However, other source 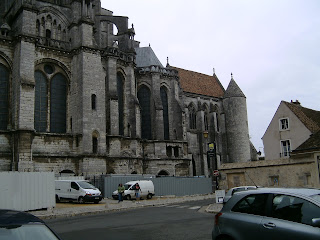 report that it was a gift from Charles the Bald and the fabric is from Syria and dates back to the first century. Regardless, many choose to believe it was worn by Mary. It remains in a golden cask and is on desplay.

I did hear one story that at least one priest (my mind is telling me three for some reason, and I wish I could remember exactly) tried to save the tunic when the church caught on fire. They were caught in the crypt below and remained there as the church burned about them. The town thought for sure the tunic and the priests were lost. But, once the flames were doused and the building cooled, the priests emerged unharmed carrying the tunic. It does make one wonder. . .

Back on the bus and we head for our next destination. Truthfully, I can't remember which place we went to first, but my next post will be visiting Chambord.
Posted by Amy DeTrempe