So, this is our actual first day in Paris. After being dropped at the hotel, everyone is assigned their roommates, a room, and sent up to drop their bags. Nothing is planned during the day of the first trip because despite plane schedules, you never know what will be thrown off, a delay, etc. So, we are on our own.

One of the first things provided to each member of the group is a tourist map of Paris, which also includes the Metropolitan (subway) map. The Metro map is invaluable if you intend to travel anywhere in Paris. Of course, you could take a bus, spend a huge amount of money (and time) on a taxi, or try to make it on your own with a rental car. None of those would work for me. After a day or two traveling the Metro in Paris, that is the only way I would attempt to get from point A to point B. 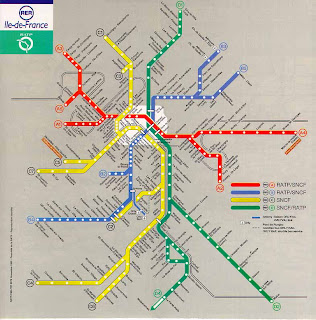 So, we have free time and Madame (my sister) decides that this will probably be the only time to spend time shopping, short of the touristy shops at the various places we visit, and we head to the nearest metro. We get our tickets and head to the correct platform. Our destination: Champs-Élysées!

If you are going to shop in Paris, this is the place to go. We exit out of the Charles de Gaulle Etoile stop. As soon as we reach the top of the stairs onto the street, the first sight to great us is the Arc de Triomphe. Don’t even think about trying to cross the street to get to it. It sits in the middle of a road, at least four (possibly 6) lanes wide, that circles around th 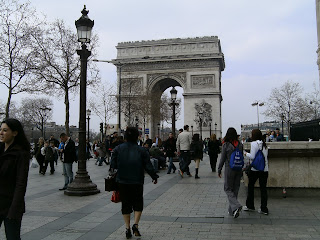 e Arc with 11 or 12 different streets leading into and exiting off of it. Luckily, there is an underground tunnel you can take so you don’t have to risk life and limb getting to it.

Before shopping I decided to visit the Arc.

The triumphal arch honours those who fought for France, particularly during the Napoleonic Wars. On the inside and the top of the arc there are all of the names of generals and wars fought. Underneath is the tomb of the unknown soldier from World War I…The monument was designed by Jean Chalgrin in 1806, and its iconographic program pitted heroically nude French youths against bearded Germanic warriors in chain mail. It set the tone for public monuments, with triumphant patriotic messages, until World War I…It was commissioned in 1806 after the victory at Austerlitz by Emperor Napoleon at the peak of his fortunes. Laying the foundations alone took two years, and in 1810 when Napoleon entered Paris from the west with his bride Archduchess Marie-Louise of Austria, he had a wooden mock-up of the completed arch constructed…Napoleon's body passed under it on 15 December 1840 on its way to its second and fina 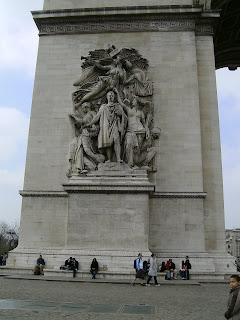 l resting place at the Invalides.[6] The body of Victor Hugo was exposed under the Arch during the night of the 22 May 1885, prior to burial in the Panthéon…Following its construction, the Arc de Triomphe became the rallying point of French troops parading after successful military campaigns and for the annual Bastille Day Military Parade. Famous victory marches around o 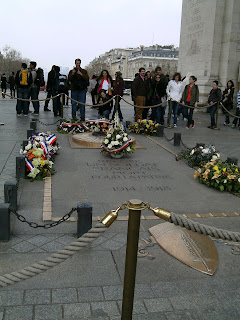 r under the Arc have included the Germans in 1871, the French in 1918, the Germans in 1940,[8] and the French and Allies in 1944[9] and 1945. A United States postage stamp from 1945 shows the Arc in the background as victorious American troops march down the Champs-Élysées and U.S. airplanes fly overhead…(From Wikipedia) 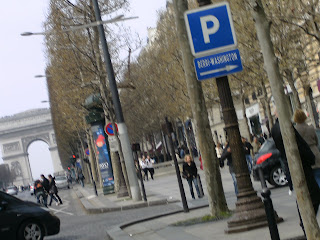 After visiting the Arc, it is time to return to the other side. We stop at a side café for a bite to eat before we begin to peruse the shops. I will also admit, this is officially my first glass of wine in France. Once appetites are satisfied, we stroll down the avenue for more than a few blocks before heading back. Of course, we stop in a number of stores along the way and I purchased a cute blouse, after I figured out what size I am in France.

I love the Champs Élysées and could spend a lot more time there than we did. Of course, if we had, my vacation budget could have easily been blown in one afternoon so it is probably best that we were limited to only a few hours.

Our first scheduled event will be dinner. I cannot recall the name of the restaurant for either of my first nights in Paris, nor what I ate. I just know the food was always good and the wine very reasonable. In fact, wherever we went, a glass of the house wine was the same price as a glass of soda. You can’t beat that.

So ends our first day in Paris. Exhausted, we all make our way to our rooms because we know tomorrow is going to be a long and fun day.