With the inside tou 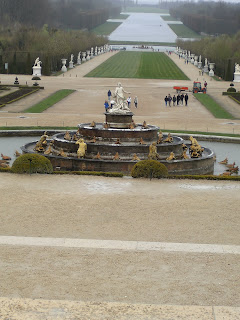 r of Versailles complete, it is time to venture outside. As I mentioned in previous posts, the weather on my first visit was perfect. All we needed was a light jacket. On the second visit, not so much. In fact, it was raining, the wind was harsh and it was cooooolllllldddddd. Still, I refused to remain inside.

The gardens of Versailles are amazing and I could go on forever. The pictures show the main avenue toward the Fountain of Apollo and the Grand Canal. On my first trip I walked to it. What is hard to see are there are paths venturing out on both sides leading to separate avenues, groves and gardens. Those I have not yet visited, but I’ve seen photos and read descriptions. A few would include “The Ballroom” which is a Circular garden with a cascading waterfall. In the center of the grove, balls had been held. Can you image a formal ball, dancing under the stars, the sound of tinkling water in the background? Others include The Dauphin’s Grove and the Candelabra Grove, The Salle Des Marronniers, The King’s Garden and the Colonnade. Each and every one of these includes 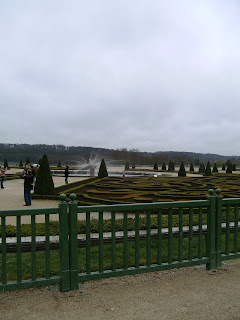 If you continue walking you will eventually come to the Grand Trianon. This place was reserved for concerts, festivities and a place to eat. It was also the location where Louis XIV invited ladies o the Court to visit him. The grand Trianon is also surrounded by flowers and were chosen for a variety of colors as well as their perfume. Either the queen and/or the king must have spent a good deal of time here because they both have bedchambers, at least four drawing rooms and Louis-Philippe’s Family Draw 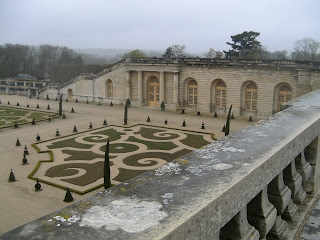 ing Room, as well as a gaming room and a Gallery and Chapel.

Further out is the Petit Trianon, which Louis XVI gave to his queen as a gift to “make a life for herself away from court”. Among the many rooms includes a Theatre.

Lastly, if you go far enough you will come to the Queens Hamlet. This is a picturesque cottage, with supporting farm and quaint gardens. Marie Antoinette would come here to “get away” and relax. She liked to shepherdess. However, unlike most true shepardess, the queen insisted the sheep be died to match her gown before she played.
Posted by Amy DeTrempe