Day 3 in Paris and we are going to visit my favorite place. I am so excited when I wake. I dress quickly, not that it matters because we are on a schedule, and head downstairs for breakfast. That is when I look outside. The sky is overcast and threatens rain. NOOOO, I cry inside my mind. Rain any day but today, pleaassseeee! I anxiously watch the sky from the moment we leave the hotel and all through out drive. Before we left I reluctantly went back upstairs for my umbrella, but was determined not to need it. 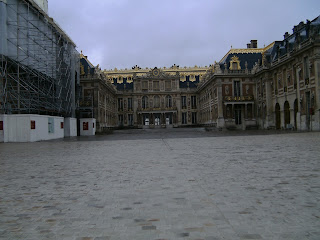 The bus pulls into the gravel drive and still no drops. So far so good. We are early and need to sit in the bus for another twenty minutes before we will be let inside. I can see my destination in the distance and want to get out so I can walk closer.

We are finally allowed to step outside and move toward our destination. No sprinkles yet, but the wind is stronger than a breeze. However, I will not let it dampen my mood. As soon as we reach the entrance, a few drops fall. Still, it isn’t a downpour and I am certainly not going to melt in the rain. The last thing I am made of is sugar. However, I have eaten enough of it in my life one has to wonder.

Modern technology has become a fixture at the entrance and we need to place our bags on a conveyor belt to be taken through x-ray and we walk through the metal detector. On the other side we are handed MP3 players. These are to assist us with our tour throug 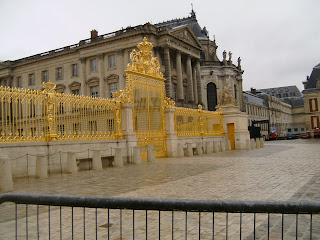 h VERSAILLES. Did I mention this is my favorite place in France? Well, so far at least. The last time I visited was a beautiful day. Absolutely gorgeous and I wish I had the pictures to post but my eldest has those as she was the photographer on that trip.

Originally, when the palace was built, there were two sets of gates. To the left of the first were the stables and to the right, the kitchens. The second was torn down during the French Revolution. When the kings lived here everyone could enter Versailles. Several guards were posted to confiscate weapons, search carriages and to ensure the visitor was properly dressed. It was built by Louis XIV because he wanted to get away from Paris. Versailles is not too close but neither is it too far and large enough for him to have his court permanently around him, including aristocracy, ministers, advisors, etc. Anywhere from 3,000 to 10,000 people lived at Versailles at one time. From 1682 until 1789 it was the seat of the absolute monarchy of France, where the King rules alone. Well, we know what happened in 1789, but this post is not about the French Revolution, it is about the palace. 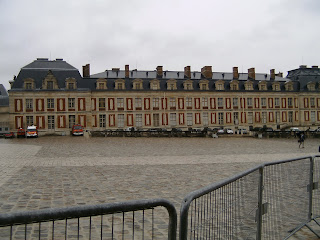 Versailles was originally the hunting lodge for Louis the XIII but refurbished. The construction lasted over 50 years. And in 1682 it became Louis XIV’s official residence and in ten years the expanse was ten fold.

We need to tour the inside first so we can hand out MP3 players off before we step outside. Because of the threatening weather I wish we could do this the other way around, but I don’t have that choice. My plan one day is to travel here, without being part of a tour, so I can stroll and explorer on my own schedule. There is just so much to see that this post will cover at least two days. Today, we are going to tour the inside, or what we were able to see anyway.
Posted by Amy DeTrempe