I no longer know which day I am into my trip. I know I stepped out of order due to Bastille Day, so I will continue with everything else we did that day. 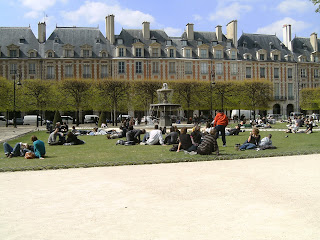 Once we stood in the spot where the Bastille had once stood, we broke into groups and headed for lunch. The place we chose was about five feet away, with outdoor seating. Today, I had what I was craving - Croque Monsieur. I tried this the first time I was in France. When someone recommended it, I almost didn't get one. I didn't come all the way to Paris to have a grilled ham and cheese sandwich. Am I so glad I tried one. This is not at all what I envisioned. Ham, Bread, Gruyere Cheese, and more. Here is the recipe for the sandwich pictured: www.recipezaar.com/recipe/The-Classic-French-Bistro-Sandwich-Croque-Monsieur. I've attempted to make them at h 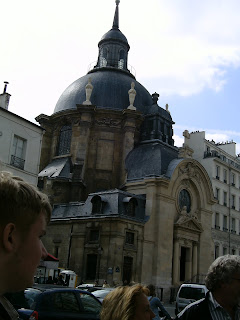 ome. They were okay, but they taste much better in France. However, I may just have to head to the store after this post because just the idea of the sandwich is making me hungry.

Following lunch we head toward our destination. Luckily we have a walk ahead of us to enjoy more sites. We walk down narrow streets and pass in from of cafes and shops and come to Palace Des Vosges. I square building with a large courtyard inside. The square is made up of houses and apartments with a red bric and stone facade on the outside. And the apartments were used for several years. Some of the more famous residents were Boussuet, Richelieu and Alphonse Daudet. But probably the most well known would be Victor Hugo, who wrote most of Les Miserables while living there. I would love to explore the inside one day.

Long before Victor Hugo however, the land was the site of the Hôtel des Tournelles and its gardens. Tournelles was the royal residence of Henri II and during a tournament he was wounded by being stabb 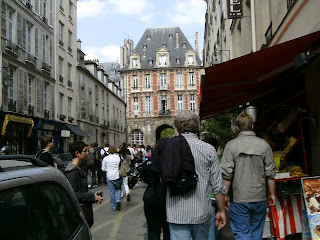 ed in the eye. He did a short time later. His wife, Catherine de Medicis, had the original structure demolished. We strolled from one entrance and crossed the courtyard to exit on the opposite side. The insice is a parklike setting with people sitting about conversing or reading.

We excited out onto another street and continued. Some of the buildings are newer and some, not so much. I had to take a picture of this church. I have no idea of the age, but it looked rather old to me.

Finally, we reach our destination - the Picasso Museum. I will be honest, Picasso is not a favorite of mine. If I were given a choice, I would have picked the museum where the Auguste Rodin statues can be viewed. Ah, but nobody asked me so here we are. 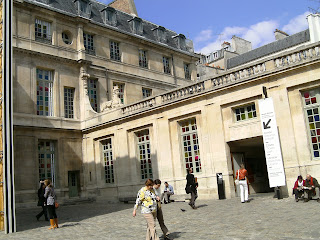 On the outside, right before you reach the entrance is a large distorted mirror. The type you may find in a funhouse. The students had fun watching their shapes adjust. I looked for a spot that would make me look thinner, but one could not be found.

Inside it was a three storey (I think) house. In each room were displays of his art work from various stages. I believe Picasso was a true staring artist because I beleive they told us that everytime he was behind on taxes, or his heirs were behind, they gave France a painting.

All in all it was another fun day in Paris.
Posted by Amy DeTrempe