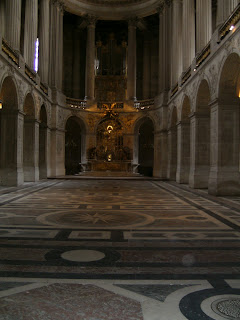 The Royal Chapel: We are not allowed to go in but can stand a look through the door from the first floor. It is a gorgeous, two story chapel with carved white pillars. The ceiling is a painting The Heavenly Father in His Glory Announcing to the World the Promise of Redemption, by Antoin Coypel. The center is God and he is surrounded by adoring, winged angels, both male and female and of all ages.

The Hercules Drawing-Room: This had been used as the chapel until the Royal Chapel was complete in 1710. The redecoration was complete in 1712 with Veronese’s painting, The Meal at the House of Simon¸ originally painted and given to the Refectory of the Convent of the Servites in Venice around 1570 and gifted to Louis XIV in 1664. The ceiling is a painting by Francois L 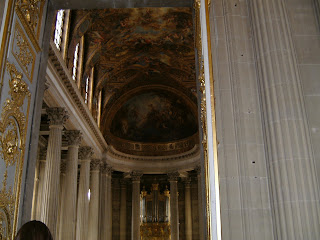 emoine, The Apotheosis of Hercules.

The Drawing-Room of Plenty: I believe this room eventually became King XVI’s game room. On “apartment” evenings, when people visited, buffet tables were set about with refreshments.

Venus Drawing-Room: This is the main entrance into the State Apartment. More artwork abounds from more paintings on the ceiling to a statue of Louis XIV by Jean Warin.

Diana Drawing-Room is adjacent to the Venus Drawing-Room and served as a vestibule and at one time the billiards room for Louis XIV.

Mars Drawing-Room: A guards room until 1684, and has a military theme, became a music and games room. Red papered walls and crystal chandelier hang from the ceiling. Musicians would set up in on or both of the marble galleries. On the ceiling Claude Audran painted Mars in a Chariot Drawn by Wolves. 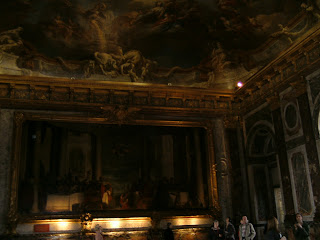 Mercury Drawing Room: The king’s bedchamber and also has red papered walls. The original gold headboard was melted down by the king to meet the expenses of war. It was in this room where Louis XIV lay in state for 8 days in 1715.

Apollo Drawing-Room: Also, the Throne Room. The original furniture was silver, but these furnishings were also melted down by Louis XIV in 1689.

Hall of Mirrors: Perhaps I should have saved the word Magnificent for this hall. It was built on the site of the original terrace. Along one wall are mirrors, separated only by statutes. On the opposite side are wind 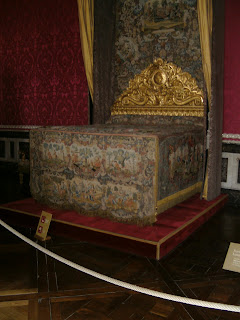 ows which look out over the vast gardens of Versailles. There are no words I can use to describe the beauty of this hall. Used for state events, only on occasion, and it was the place for the celebration following the wedding ceremony uniting Louis XVI and Marie Antoinette.

Peace Drawing-Room: Separated from the Hall of Mirrors and turned into the Queen’s Apartments.

Queen’s Bedchamber: It is the only place she slept (unlike the king who had more than one bedchamber), and the room where the king would visit her. This room also saw the birth of nineteen children.

Salon Des Nobles: This is basically the queen’s throne room, where she would gather her court and grant audiences.

This is just a sampling of what can be seen at Versailles. There are rooms I have yet to visit such as the King’s private apartments, which include his bedchamber, Cabinet room, Libra 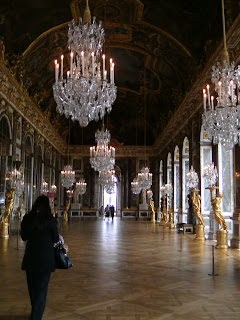 ry, dining room and Games room and the Queen’s private apartments and the rooms where the children were raised. Someday I hope to take in the entire palace before stepping outside into hopeful sunshine.

Because my notes were really, really hard to make out, I used the book I picked up while in Versailles to help me recall the order of the tour and which room held which artwork. And, I apologize if this post read more like a dry tour brochure than my memories. Even though I have been there twice, it is difficult to remember the details with regard to history, use, and the amazing artwork of each individual room. For a illustrated guide to Versailles, I recommend your visit to VERSAILLES, by Simone Hoog (Honorary General Curator of the Estate) and Beatrix Saule (head Curator). It is sold at Versailles, in every language imaginable, but can also be purchased at Amazon, though no picture of the cover is offered or I would have put it here.
Posted by Amy DeTrempe