Day 2 in Paris and our first morning waking there. After getting ready for the day and making sure I have comfy shoes, enough euro to get me through and a light jacket, I make my way downstairs for the continental breakfast. I should have taken a picture of the hotel breakfast. It consists of scrambled eggs (though they are a little different than we would have here, though I can’t quite explain it except maybe not cooked enough), breads, croissants, cheeses, cold meats, fruit, juices, milke and coffee. I fill my plate, get a cup of coffee and sit down to enjoy. By the way, this will be the same breakfast we get every day. No variations and the only thing close to hot is the eggs. But hey, that is okay. I didn’t come to France to eat breakfast.

Once done, we all board the bus for a riding tour of the city. It is impossible to see all of the sites when you will only be in the country for 7 days. Some things you just get to drive by and sometimes step outside and take photos. Below are my photos from the bus tour.

First Stop – the Eiffel Tower. This is as close as we will get – today. Across the street from where we are standing is Ecole Militaire, where Napoleon went to military school. I am sure it dates back to before Napoleon, but I haven’t gotten to that research yet. The green lawn (well it used to be there) between the school and on through to where the Eiffel Tower now stands was Champs de Mars, and where the students used to train. Sometimes the history just hi 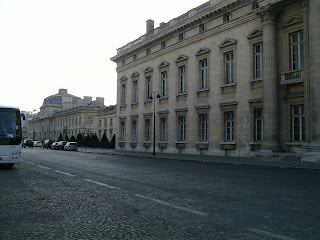 ts me. I remember standing there thinking wow, this is where Napoleon actually trained for his military career when he was a young man. I know, the man turned out to be a dictator, wanting to take over the world, or at least his side of it, but still, this is Napoleon we are talking about and I was standing where he practiced. 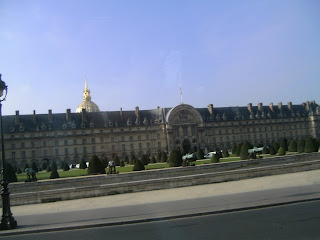 Okay, enough of that and time to get back on the bus. We next drive by the Church of the Invalides, which is attached to the Hotel des Invalids. It was initiated by Louis XIV for a home and hospital for aged and unwell soldiers. The project was initiated on November 24, 1670. Napoleon is buried under the gold dome. The building is now the Musee de l’Armee (museum of military history). 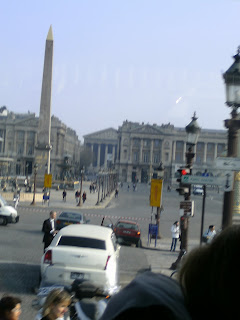 The next view out of our window is the Obelisque. It is the oldest statute in Paris and actually dates back to before Paris. Paris is 2000 years old and the Obelisque is 3000 years old. It was a gift from Egypt in 1836.

We then drive by Palace de la Revolution, a/k/a Palace de la Concord Place. It was on this square that the guillotine was set and King Louis XVI, Marie Antoinette and dozens upon dozens of others lost their head.

After the tour the bus drops us at our last stop – Notre Dame. On my first 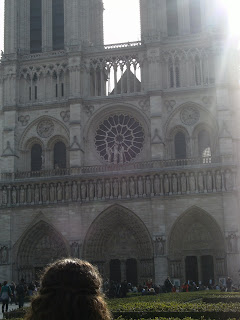 visit I did go inside Notre Dame and it was amazing. I am not Catholic but I was overcome with emotion just standing inside the cathedral. I wish I could describe the feelings within me (guess that doesn’t make me a very good writer, does it?) All I can explain is that it was spiritual, emotional, a heavy weight in my chest. Maybe it is because the place is so old and so many Christians had spent time within the walls perhaps a small piece of their soul remained. I cried, overwhelmed with emotion and have absolutely no idea why. My sister, who is not Catholic either, always lights a candle and prays. It is something she is compelle 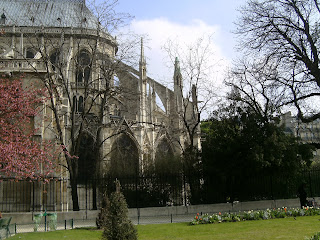 d to do whenever she visits Notre Dame. On the second trip, we arrived there on Palm Sunday. The line was huge, huge, huge, not to mention crowded. I opted to remain outside and let those who had not had the opportunity before to go inside. Outside I could still hear the music from the mass. It always seemed odd to me that while tourists and visitors strolled about, mass would be going on. I always felt uncomfortable in cathedrals we visited where mass was taking place. It just seemed wro 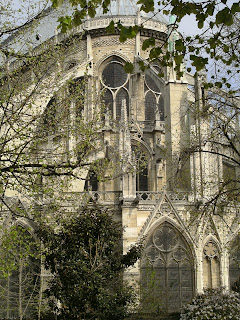 ng not to take a seat and pay attention and listen. Maybe someday I will, but with tours, time is limited.

While several of the students were inside, I and a friend strolled along the outside. I had not seen the backside of Notre Dame, though I had seen the side from the cruise along the Seine before. The gardens were beautiful and there is a park like setting at the back. 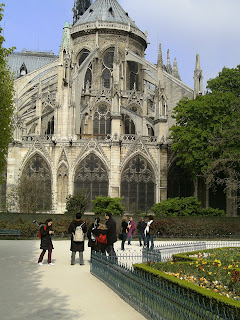 Since we had some time, we took a walk over the bridge to an area with several shops and restaurants. I was on a quest. A friend had gone this way on a visit she took and said that the best ice cream ever was in this direction. We found the shop on the second road to the right after crossing the bridge. You would miss it if you weren’t looking for it. You need to realize that in much of Paris all the buildings and connected. The ice cream shop was probably not ten feet wide. No door to go in, just a window with the daily, fresh made choices written out on a chalkboard. I had chocolate (of course) on a cone. I was delicious and I enjoyed every single lick and bite as we took our time walking back to Notre Dame. However, I did do one thing while still at this famous cathedral. There is a disc on the ground, put into the pavement. It is supposed to be the center of Paris. If you walk over it, it means you will return to Paris. I walked over it, just as I had done four years earlier.

Though the day is not done (we haven’t even had lunch yet), I am going to bring this blog to a close due to its length. I will pick up the tour tomorrow.

Have you visited any of these places? What did you think of them?
Posted by Amy DeTrempe