I am amazed it is taking so many posts to talk about my Paris trips. Okay, I have taken a few days off for Prayful Sundays and when I blogged on other sites, but still, I was only in Paris 7 days each time and this is the 20th day of blogging. It also explains why I was so exhausted when I returned. 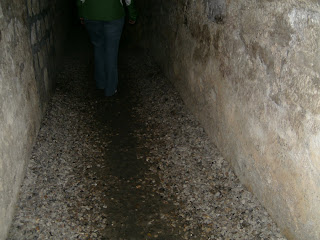 The following day was basically a free day and we set out on our own. First up, the Catacombs. Creepy, I know. I promise, the Catacombs will be a setting for at least one scene in a book someday. It is hard to explain them except they are far underground and weave for what I would guess is miles. Some alleys are roped off and tourists, or anyone else for that matter, are discouraged from going beyond the marked path because you could get lost and ramble around in there forever. There are stories of people who wandered off, never to be seen again. 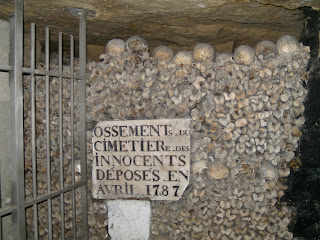 I believe the Catacombs came to be when Paris expanded. The expansion disrupted several old cemeteries. In order to have a place for the bones, they were put in the Catacombs. The bones are all neatly stacked with and by each stack of bones is the name of the cemetery they had come from. Other bodies, I believe, are from the Revolution. Robespierre was accidently taken to the Catacombs after his death, but they realized the error and he was put in a proper grave somewhere. 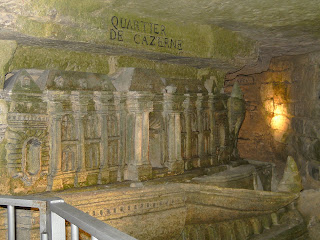 One of the most fascinating things I discovered, and never expected to see, were carvings out of the stone. And not just simple carvings, but detailed. I can't imagine who would want to stay down there for the length of time it took to complete such a work of art.

I have no idea how long we walked but when we got to the end we had to climb another tight spiral staircase. I tell you, before I got to the top my thighs were burning. At one time I stopped, convinced I could not continue on. But the thought of staying with all of the bones kept me moving.
Posted by Amy DeTrempe