Our walk continued after we left Musee d'Orsay. We crossed a bridge over the Siene and ended up at Jardin Des Tuileries. A lovely park with fountains. As I said 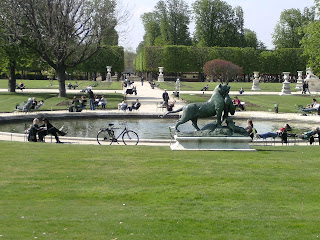 in an earlier post, this was a beautiful day, which is evidenced by the crowd and the number of people sitting around the fountain, relaxing in the sun.

The Tuileries garden was started by Catherine de Medici. It began as a private roayl pleasure garden, with flowers and fruit. From there it exanded as terraces were added and such. At the very end you can look up the Champs Elyees to the Arc de Triomphe. Read more: http://www.gardenvisit.com/garden/jardin_des_tuileries#ixzz0uNZwlCn1 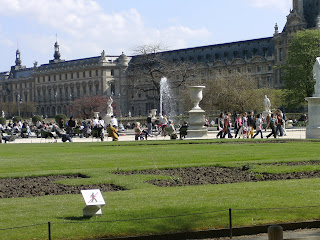 The palace was also begun by Catherine de Medici after the death of Henry II. Louis XIV lived her while Versailles was being built and Louis XVI and his family were removed from Versailles and force to live in Tuileries. It is from here they escaped. They only made it as far as Varennes before they were captured and returned to the Royal Palace. When Napoleon was in charge, it was his turn to move in. It was destroyed in 1871 when it was set on fire, destroying everying within and out.

This was my first visit t 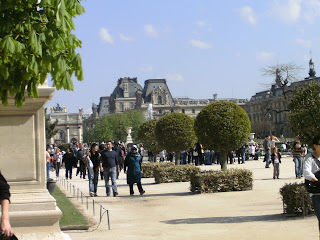 o Tuileries. On the last visit we went to Luxembourgh Gardens. Another delightful gathering place, with a lake, or maybe it is a large pond where people gather and children launch sailboats. I wish I had pictures from that trip.

I am not sure which garden is my favorite. Luxomburg is not as formal, I suppose. I think I could relax better in Luxomburg better and soak up the sun on a beautiful day or just simply relax and read a book. However, I am glad I did visit Tuileries and I think I would like to visit it again. But, if given a choice during the next visit, I think I would like to return to Luxomburg gardens.
Posted by Amy DeTrempe