This will be m 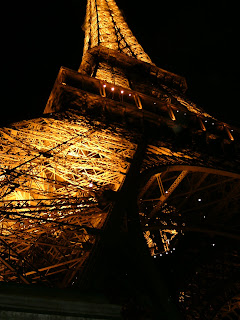 y last post for Paris in July. I thought I could fill the month but my time has been crunched. By the time this is posted I will be in Orland at the RWA Conference. I had hoped to have enough posts saved so they could run the entire time I am gone, but I am out of time for writing them.

That being said, I am going to sum up the rest of the trip. We finished off with a trip to the middle of the Eiffel Tower our last night in Paris. It was a beautiful view. This was my first time up into the Eiffel Tower. I had stayed on the ground previously. This is due to another stupid phobia - fear of heights. But, since dinner was above and I would be the only one left on the ground, I forced myself to go. I am so glad I did. The view was gorgeous and the food delicious.

By the time the night had come to an end, everyone was exhausted. It was a very busy trip, but it was a pleasant exhaustion. We rose early the next da 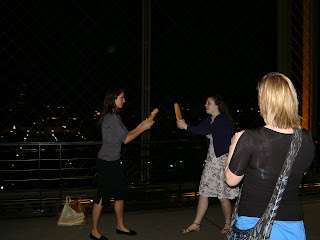 y and were taken to the airport, much earlier than we needed to be. Thus, we all had to wait until we could check in for our flight. This was also the first time I was ever pulled aside and my bags gone through and I was frisked. I was a bit embarrassed. I was so tired that my carry-on was a complete mess. I just threw stuff in that didn't fit in my luggage, deciding to deal with it when I got home. I won't make that mistake again.

I don't know why I was singled out. My name could have been random, on a list or something else could have made them question me. At least I wasn't the only one in the group. There were a few of us that got the special treatment.

Did I mind? No. If this is what we have to endure to keep the airlines safe then I am all for it. I would rather those screening were extra diligent than to wake up to the news one day and watch coverage of new horrors.

Hope you enjoyed my trip to Paris. It was fun revisiting it.
Posted by Amy DeTrempe