Palais Garneir, also known as Opera de Paris, is the one place my daughter had to see. That is all she talked about in the months leading up to the trip. It began when she wrote a paper on the history and it built from there. The picture posted was taken right before we crossed the street to enter the building.

This was my first visit here as well and I was in awe of the inside. It opened in 1875(and I had thought it was much older). It is the opera company that goes back to the 1600's. This building was simply its home from 1875 through 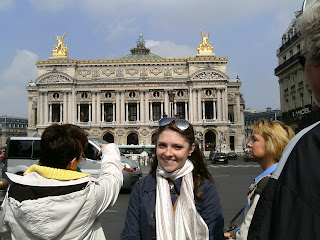 The theater portion seats around 2,200 people with a giant chandelier in the center. We were able to step inside what would be a private patron's box and look down on the seats, view the chandelier and large stage. I looked up additonal information and learned the stage could accomodate up to 450 artists. That is huge. I've blogged about theater before and the stages I have experience with get croweded at approximatley 75 people so I can't begin to imagine what it would be like standing on such a huge performance platform.

The Grand Foyer rivals the Hall of Mirrors at Versailles and my daughter and I will never come to an agreement on which is more beautiful. Of course, I still favor Versaills.

However, what this building is most famous for is the setting of The Phantom of the Opera. "In 1896, one of the counterweights for the grand chandelier fell, killing one. This, as well as the underground lake, cellars, and other elements of the Opera House, inspired Gaston Leroux in 1909 to write his classic Gothic novel, The Phantom of the Opera." (quoted from Wikipedia). We did not get to go below to see the underground lake but would have loved to.

Following our tour my daughter announced that she plans on being married there. My thoughts were 1) I better sell a lot, I mean really a lot, of books 2) we hit the lottery (guess one of us should start playing) or 3) it will only be her, her husband and the few people who could afford to travel. I really hope she doesn't have her heart set on this. I haven't asked her recently, fearful of her answer.

After our visit we headed down the road and at lunch at the Paris Hard Rock Cafe, where t-shirts were purchased and a delicious meal enjoyed.
Posted by Amy DeTrempe