When I last left off we had been at Notre Dame. While in the area we broke into groups and headed to one of the many café’s for lunch. I absolutely adore the café’s w 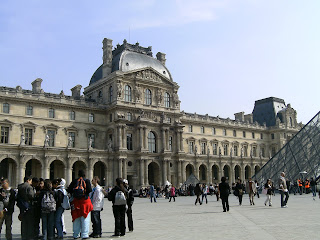 ith outdoor seating. It is so much fun to sit and watch people stroll by. I’ve passed some outdoor areas where the tables and chairs are all in a row – all facing out toward the street as opposed to chairs on all sides of the table for conversation. I prefer the ones where I can sit and converse with others. In all actuality, I cannot recall if we ate lunch before or after the visit to Notre Dame but the more I think about it, it was before. 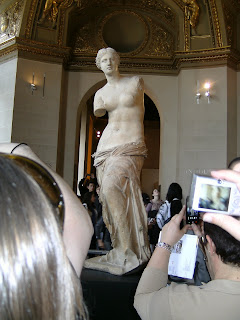 Once we were back on the bus, we headed to another famous spot – the Louvre. Wow, does this place have a history. We are given maps and we broke up into different directions to see the artwork we were most interested in. A number of the students headed for the Mona Lisa. The first time I did this as well, especially since that trip came on the heels of reading The Da Vinci Code. I was really surprise to see that it was much smaller than I imagined. I guess I never paid attention if anyone told me the size, but I was really expecting a larger painting. I am still glad I got to stand before it.

On both visits I roa 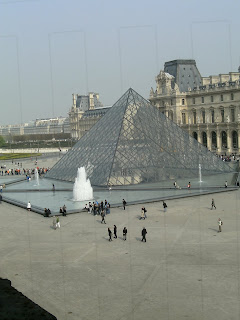 med and roamed and tried to take it all in – IMPOSSIBLE! I had the same feeling I did when I visited the Smithsonian, a person needs a weeks to take it all in. In fact, our tour guide quoted that it would take 8 months to see everything in the Louvre if you only stood in front of each piece of art or historical item for 30 seconds. Even then you wouldn’t see it all because they still have a bunch of items in storage. Apparently they have or will be opening another portion of the museum or one somewhere else to house the art that is not on display. I didn’t catch the exact details, but I think there is going to be an extension in another town perhaps.

Historically, the Louvre was built in the 12th Century to protect the city. It became the residence for the king in the 15th Century and each one made a ch 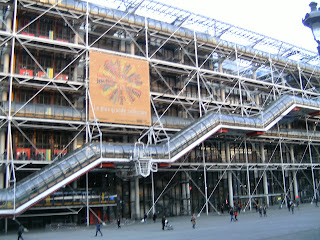 ange of left their mark. The French President placed the pyramid at the Louvre as his 20th Century gift.

Following our visit to the Louvre, we were once again back on the bus for a continued tour of Paris, which ended at the Champs Élysées. The drive also took us by the Opera d’ Paris, which we will visit later.

The day ended with dinner at a Moroccan restaurant not far from Pompidou Center, a place I have yet to visit. This is a picutre of the outside of the Pompidou.
Posted by Amy DeTrempe